The images go from North to South. 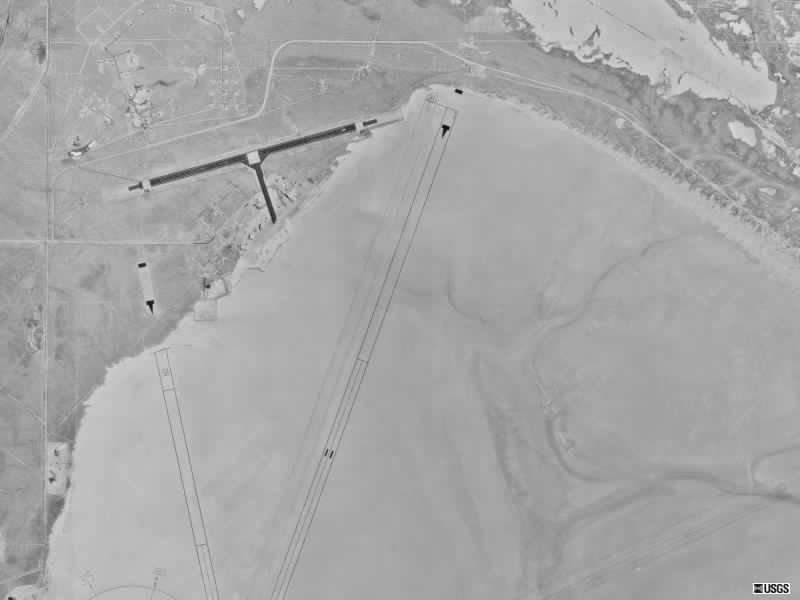 Above you can see the North Base Area and some of the lake runways.
The longest runway on this image here has actually been moved aside from its original location, probably due to wear or weathering. As has a few other runways. 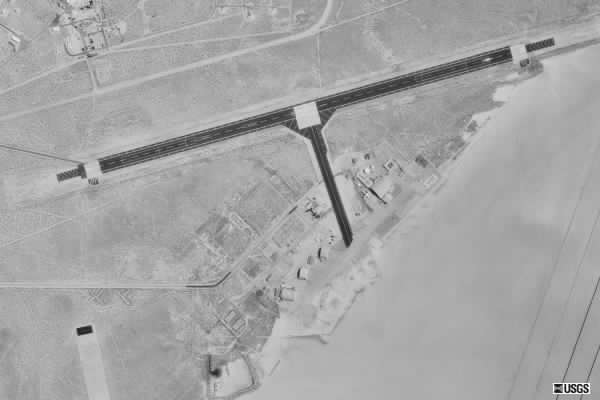 Edwards AFB North Base where the secret programs are developed. The AFFTC Det 3 is located here as well as other areas of the base. Seen here are various hanger buildings, which stretch from the main north base area to along the southwestern road/taxi-way.
The runway is 6,000ft so cannot handle larger aircraft.
There are four large hangers in the base with smaller buildings surrounding. Also here, most of the base is actually sealed off with security vaults in parts of the buildings. Only authorized people can get through to a building from other parts of the base. It is highly secured.
The Base was situated here because it is well away from workers at the main Edwards South Base. Operations can be viewed from Highway 58 but views are very limited mainly due to the haze. 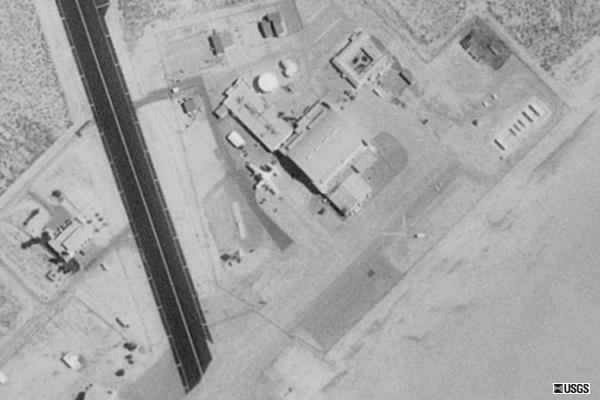 Shown here is a closer view of the main hanger and building complex. Most of this area is secured.
Outside of the hanger is what looks like a possible modified C-130 Hercules.
It is not a very large complex but it doesn't need to be. The runway here is not used for Secret operations such in Jet aircraft or other means, as the runway is not long enough to support these. Large aircraft that need to visit the complex will need to use the larger runways available on the lakebed such as C-5 or C-141's. 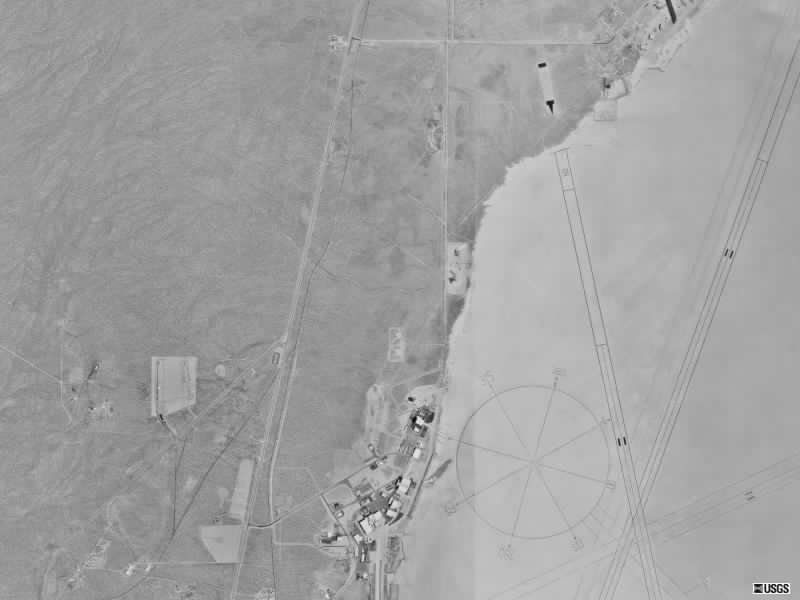 In this image above we can see Dryden Flight Research Center. This is located north of the main Edwards AFB.
The very large circle you see on the lake bed is actually a 'drawn' on Compass Rose to aid flight test programs at high altitude and also the Space Shuttle for when it glides in to land. 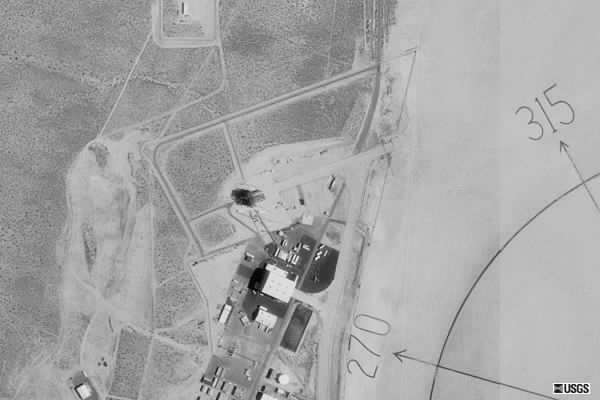 A slightly blown up image of the northern part of Dryden Research Center. The large compass rose can be seen and you can see how large this rose is.
The area above is part of the NASA Shuttle mating facility area. The B747 STA is missing from the photo and is usually parked opposite the large zero next to the large white building. 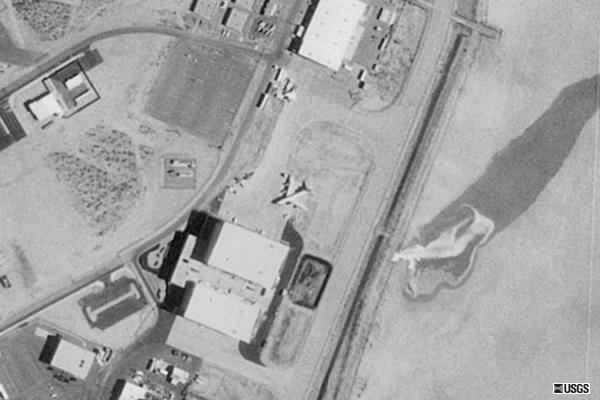 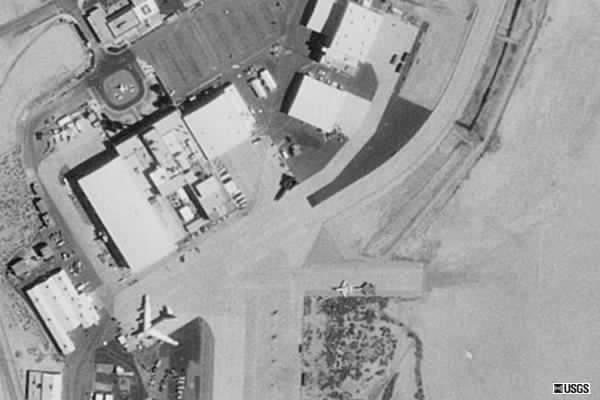 Above is the Southern part of Dryden Research Center and clearly dominating the area is the oldest serving B-52 in service.
Its number is 0008 and it carries mission marks of every sortie it has done working for NASA from the X-1 to X-15 and present day missions. It was taken out of service a few years ago for a major life update program to keep it flying for future flight tests. It is mainly used for Air-Launching vehicles.
Another now 'rare' sight is the SR-71 Blackbird sitting on its ramp. This was taken out of service in October 1999 and mothballed.
To the right of the B-52 is one of the most advanced aircraft to date. The YF-23 ATF that went head to head with the YF-22. The YF-23 is on part of a taxiway to the Lake bed runways and is the dark colored aircraft out of the two. It is one of two prototypes of which the other one is residing in a museum in California.
The building in the main facility with a roundish area outside of it with a white mark in the middle is the actual Dryden main building and is the front 'gate'. The mark in the circular grass area is actually an X-1 which broke the Sound Barrier. It stands as Gate Guardian to Dryden. 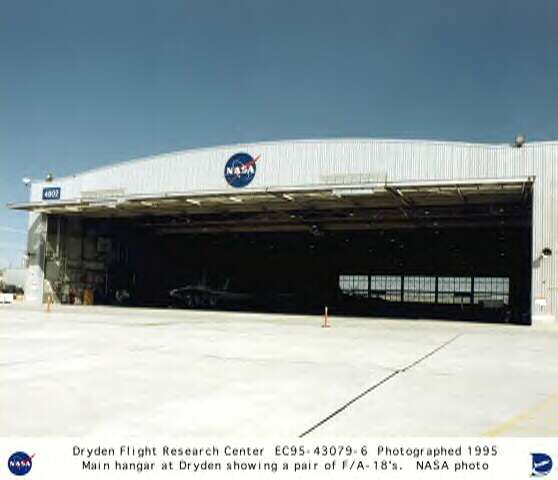 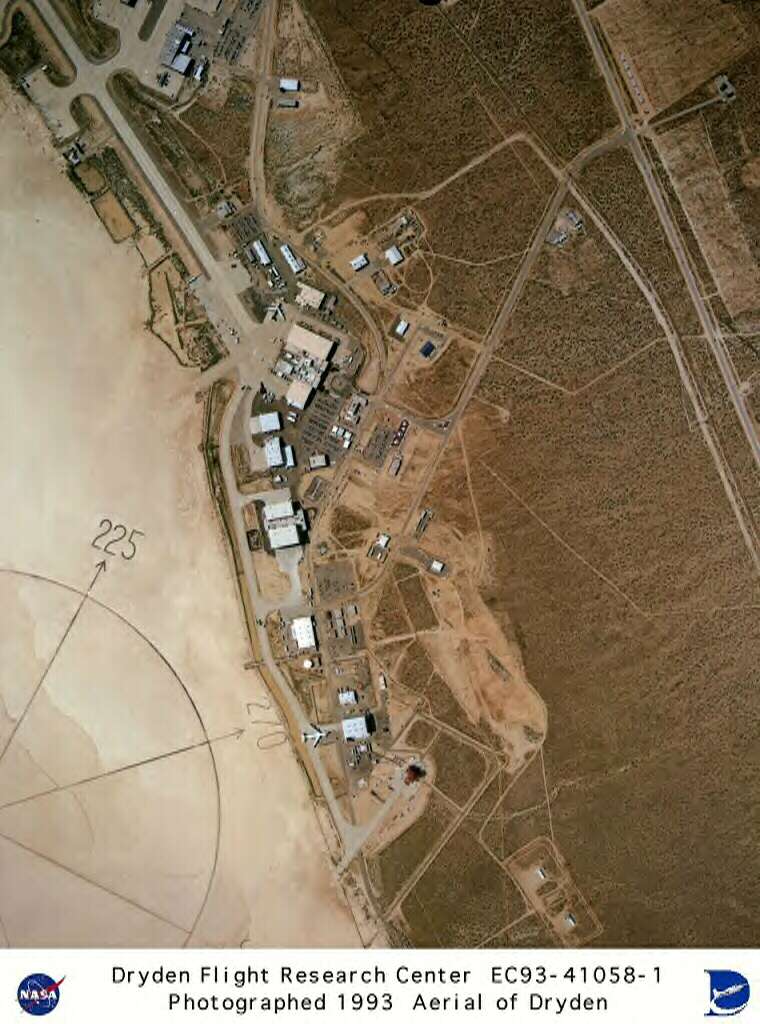 Photo Courtesy of Dryden FRC.
Above is the whole of Dryden Flight Research Center taken in 1993.
Aircraft that can be recognized here going from bottom to top are:
The Boeing 747 STA residing at its place of the Shuttle Mating Facility (Bottom of picture)
The Lockheed SR-71 Blackbird
The Boeing B-52 Stratofortress Launch Aircraft
Lockheed C-130 Hercules (top of image) 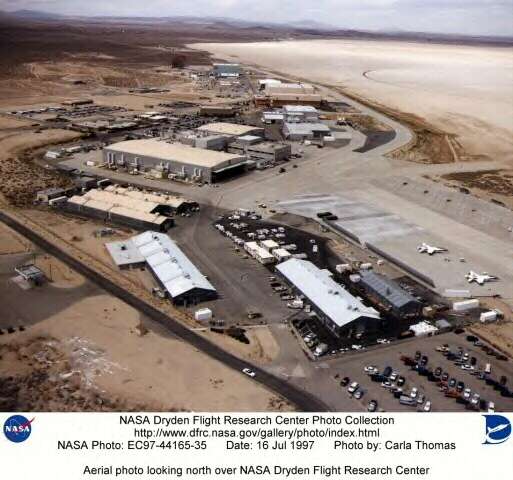 Courtesy of Dryden FRC.
Showing an image dated in 1997. This is looking North, with the Edwards North Base in the distance. This photo shows to good effect how remote the North Base is and so viewing with the mk-1 eyeball is very hard.
Two F/A-18 Chase aircraft can be seen on the main ramp area.
All aircraft seem to be flying or in hangers. The B-52 is probably being refurbished at this point and the SR-71 is missing.
The SR-71 was actually mothballed several times in the late '90s and reinstated for further tests until in Oct 99 when it was mothballed once again for good. 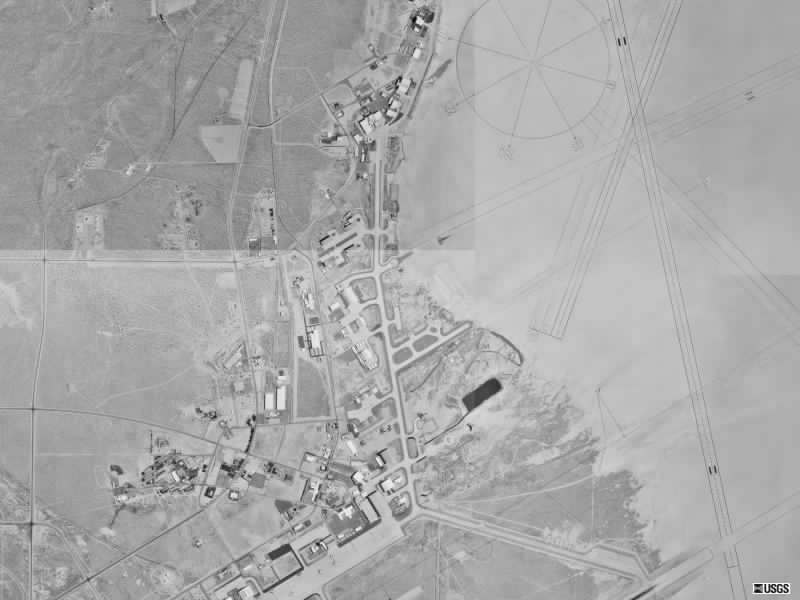 Now coming southwards we are into the main base area for Edwards AFB.
Dryden is at the top of the image with the main runway of Edwards at the bottom image just out of view.
The main ramp area is the large open area at the bottom of the image also.
In the center of the bottom of the image is a large hanger which is elongated NW to SE and this is the famous Benefield Anechoic Chamber which is Building 1030. The world's largest anechoic chamber electronically secure and quiet environment simulating an outdoor range. It is used for RCS testing and was originally built for Rockwell and their B-1B Lancer for RCS testing and Anechoic trials. Inside resembles something out of a sci-fi movie with very small diamond/triangular shaped covered walls, floor and roof. The British AFFTC has a similar building but much smaller is size located at RAF Boscombe Down.

See Exclusive Aerial Photos of  Edwards AFB  for more of a close up view of this facility and others.

As well as the base facilities, most of the main lake runways can be seen here including again, the compass rose.

Above are some of the areas zoomed in from the image above this.
Some of the flight test and chase aircraft can be seen here. These are F-15 Eagles and C-130 Hercules
The large hanger at the bottom of the image looks as if it caters the largest of aircraft. On the ramp outside of it are exhaust marks of where aircraft have been started up and ground tested. This is the area below the large hanger seen in the above image.
Clearly in view are three C-17A Globemaster III Transport aircraft and two C-135 variants
There are extensive ramp areas dotted around most of this area with again extensive hangarage. 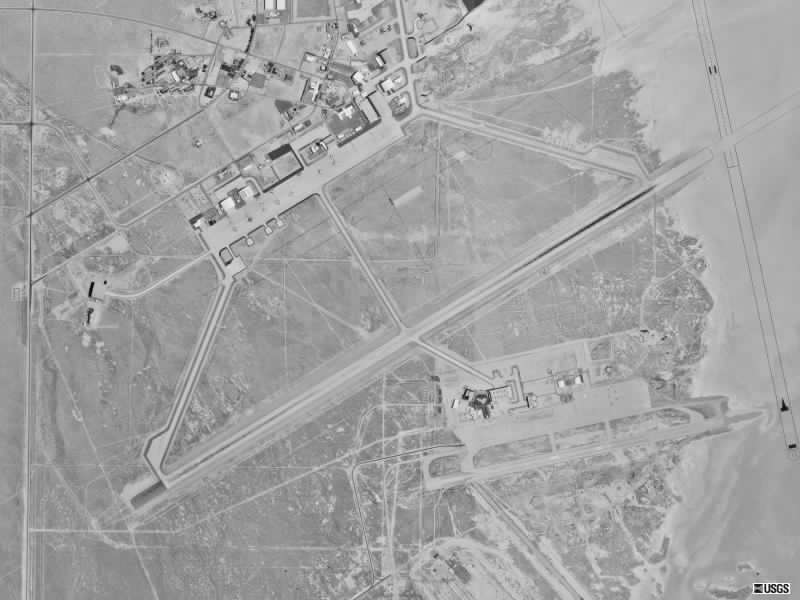 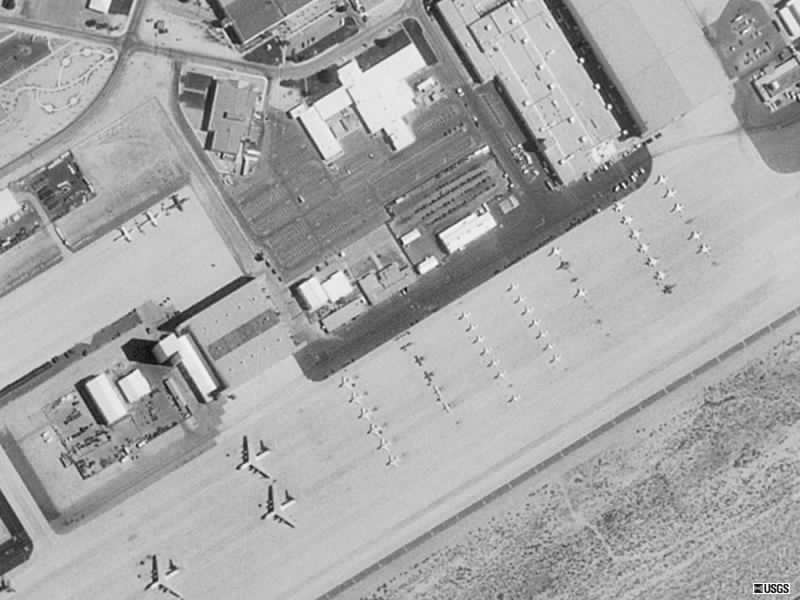 On the top right of the image is the Benefield Anechoic Chamber. A Very large building. Parked outside of the chamber are some white colored T-38 Talon Chase Aircraft. Going left and southwest are more of the same type and also some F-16 and F-18 and F-15 aircraft.
Left of these are some more T-38s and prop aircraft, possibly Texan's. Larger aircraft left are possibly biz type jets used for calibration, simulators and so on.
The largest aircraft seen here are short hulled C-141 Starlifters used as test aircraft and transport.
To the north and above these are a few C-130 Hercules aircraft. Looking at these aircraft you can see how large the Anechoic Chamber really is. It is an awesome building. 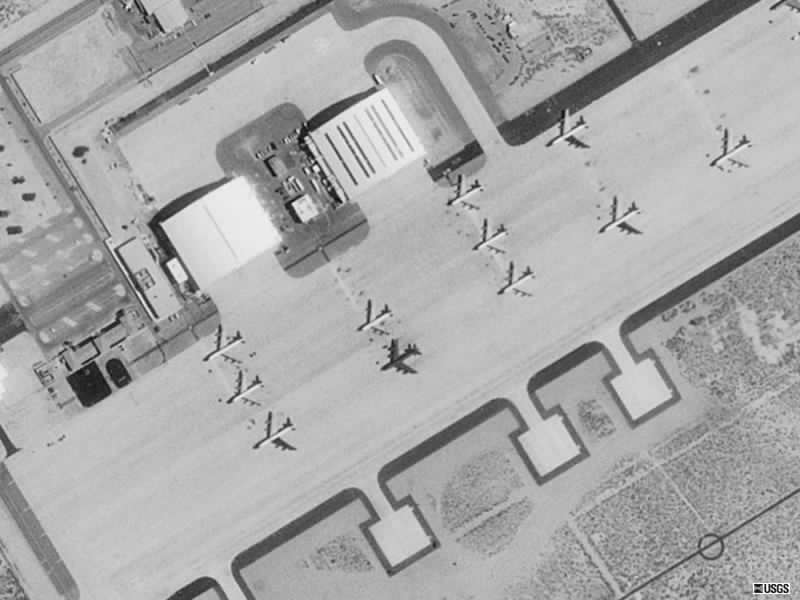 Above is part of the same Ramp but further southwest of the last image.
These aircraft are the workhorses of the fleet. They are different variants of the -135 family.
The white aircraft with one black wing are EC-18 aircraft and are used as ARIA on Cruise missile test flights and also Visual Identification trials with T-38 Talons and others.
Some of these variants are larger than others, with some being 720 variants and some 707 variants. A Few NKC-135 aircraft are parked up here used for trial work ranging from calibration, jamming, refueling and the like.
Two aircraft, an EC-18  ARIA and NKC-135 FISTA (Flying Infra-Red Signature Technology Aircraft) were used last year during the Leonids meteor shower with the FISTA having 20 windows placed in the top of the fuselage so sensors and cameras could check out the shower over the Mediterranean Sea.