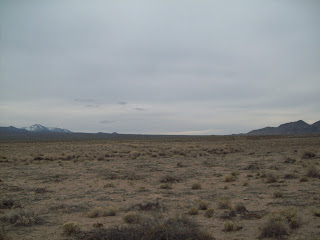 *The picture above is the direction we were looking that night. This picture was taken three weeks later to show the location of our sighting. I believe it Area 51 airspace between the two peaks.

I took some friends out to Rachel to check out Red Flag exercises and to get an Alien Burger on Tuesday evening. We were out at approximately 10:30pm between Rachel and the Back Gate. We only had one visit from the Cammo Dudes. They drove up to us, took a quick look and left. Looking towards Area 51, we noticed a faint light rising, then getting brighter, and then zig zagging left to right and going a little higher or lower and then completely going out. At it's brightest, it looked like a normal flare. We saw this happen 3 times. Nothing really noticeable on the video camera or digital cameras because we are guessing it was actually taking place quite far away. I am guessing it had absolutely nothing to do with Groom Lake and it was some sort of flare from the exercises of Red Flag. It just looked curious because it appeared to be coming up from Area 51. I am thinking that would put the activity more towards the NTS. I don't know anything about flares and am only wondering if anybody has seen something similar. Any info would be great! Also, great sonic booms and incredibly fast movers all night long over Rachel!!!

We were approximately one and half miles from the Rachel gate on the dirt road facing Area 51. There were mountains to the left and right of where we were viewing. We appeared to be viewing Area 51 airspace between the mountains. Each time the faint light came from the right side. I would guess that was the right side of Area 51 or the NTS side. The light would get brighter as it rose and it generally rose in a directions that would be heading over Area 51 or to our left. It appeared to zig zag over Area 51 and get brighter and then dim completely out. I would say we were between 1-2 miles from the back gate at Rachel pulled off the road facing Area 51. there were two SUV's of people and everybody was watching the activity. To the best of my knowledge it appeared to be over Area 51, but it easily could have been on the NTS side of Area 51. the video cameras did not pick it up. It was very windy and cold so we tried to film it from the window of the vehicles. I think the lights from Las Vegas also hampered the filming. Honestly, I never picked it up until the third time when somebody from the other vehicle ran over to see if we were seeing "it". I only saw it once. The others in the other vehicle saw it two times before. When it reached the highest point is was rising to, it would zig zag to the left and right and then disappear or dim ??? At the point it was no longer visible it appeared to be over area 51 and we never saw it descend. It only went up, got brighter, and then zig zagged left and right and them we couldn't see it. I asked the others if they ever saw it go down and they said "no". It appeared to disappear at it's brightest without losing elevation. to recap it came up from our right (NTS) and then zig zagged to our left and disappear where I believe Area 51 airspace is.