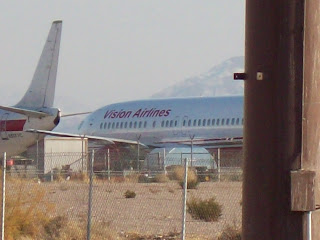 I was down by the airport yesterday shopping at Frys Electronics and I noticed that there was quite a bit of construction where the Janet Planes usually park on the weekends. They are tearing up the asphalt. The majority of the planes were a little south of there normal parking place. Right in the middle of the Janet Planes was the white jet with a bright red tail. It is a Vision Airlines plane. I guess the Janets took over it's normal parking spot. I have never seen a Visions Airlines plane before. There were also two white buses in the Janet terminal parking lot. I guess the workers are riding in style. The buses were really nice. No markings at all.