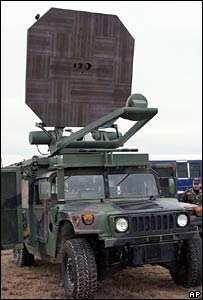 
The US military has given the first public display of what it says is a revolutionary heat-ray weapon to repel enemies or disperse hostile crowds.
Called the Active Denial System, it projects an invisible high energy beam that produces a sudden burning feeling.

Military officials, who say the gun is harmless, believe it could be used as a non-lethal way of making enemies surrender their weapons.

Officials said there was wide-ranging military interest in the technology.

"This is a breakthrough technology that's going to give our forces a capability they don't now have," defence official Theodore Barna told Reuters news agency.

"We expect the services to add it to their tool kit. And that could happen as early as 2010."

The prototype weapon - called Silent Guardian - was demonstrated at the Moody Air Force Base in Georgia.

A beam was fired from a large rectangular dish mounted on a Humvee vehicle.

The beam has a reach of up to 500 metres (550 yards), much further than existing non-lethal weapons like rubber bullets.

It can penetrate clothes, suddenly heating up the skin of anyone in its path to 50C.

But it penetrates the skin only to a tiny depth - enough to cause discomfort but no lasting harm, according to the military.

A Reuters journalist who volunteered to be shot with the beam described the sensation as similar to a blast from a very hot oven - too painful to bear without diving for cover.

Military officials said the weapon was one of the key technologies of the future.

"Non-lethal weapons are important for the escalation of force, especially in the environments our forces are operating in," said Marine Col Kirk Hymes, director of the development programme.

The weapon could potentially be used for dispersing hostile crowds in conflict zones such as Iraq or Afghanistan.

It would mean that troops could take effective steps to move people along without resorting to measures such as rubber bullets - bridging the gap between "shouting and shooting", Col Hymes said.