Predator is in operational status and was recently used in Afghanistan and in the war in Iraq. The Predator also has an endurance of 40hrs but is only half the size of Global Hawk. It is based at Indian Springs airfield near Las Vegas on Hwy 95.
Although originally developed as a reconnaissance platform, a combat version of the Predator, equipped with Hellfire missiles, has been introduced in 2002. It was also successfully used in the Iraq war. 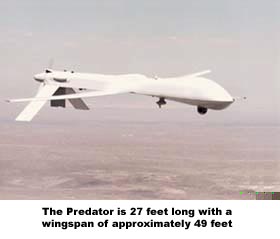 2003 photo of a predator in tactical use at a base in Pakistan, near the border with Afghanistan.
With friendly permission by Andre Dall'au.