Donut on a Rope Contrails
Are they made by normal jet aircraft or Secret Black Programs?

Well, after studying the now famous contrail photographed by Steve Douglass some years ago now, i decided to see if these vapour trails were made just by Secret Aircraft or possibly normal Jet engined aircraft such as Fast Jets and Airliners.
After several years i have seen many many vapour trails that resemble the famous trail and some are nearly exactly the same. HOWEVER, they were all made by normal military aircraft and on some occasions by large airliners.
Below is what i think about the whole 'Donut-on-a-rope' contrail story.

When i first saw Steve Douglass' photo of the vapour trail, i was immediately fixed on proving that his trail and many others similar were made just by normal everyday aircraft with jet turbofan engines.
I have the same hobby as Steve Douglass, i have been monitoring aircraft for some years and for most of my life i have been a keen Military Aviation enthusiast, lucky enough to see near nearly all of the worlds air arms aircraft flying.
I spend hours sitting on top of hills with my scanners and binoculars watching and listening to military aircraft. If i'm not on the hills, i'm at home scanning aswell...
Living in an extremely active MTA(Military Training Area) and a dedicated Low Level Training Area i get to see everything from nearly all NATO Air Arms flying very low level to huge dogfights and air intercepts medium - high level. I also see everyday, the British AFFTC aircraft on trials out of Boscombe Down.

Like Steve, wherever i go, i take my camera and binoculars with me - just in case - i do something interesting.
There have been many times i have seen similar vapour trails to the D-O-A-R trail but have not taken photo's of it...instead looking in my Bino's at the aircraft making it....
A good few times the aircraft making these trails have been Boeing 747's coming back and going to the Eastern United States. I live directly under one of the main air-routes to and from the States and England so i see an awful lot of civil jet liners overflying.

However recently i have had the brains to start taking photographs of these strange trails made by the jet engines.
Within two weeks i managed to catch two vapour trails identical to the one Steve Caught a few years ago but from TWO different aircraft.

Below is the first photograph i shot when on a hill near where i live. A Favourite place to watch military jets Below in the valleys and dogfights above you.
details are below

Albeit much smaller due to the atmospheric conditions on the day...the trail only lasted a few minutes.
Looking at the photo you can clearly see the 'puffs' on a string of trail made by the engine. A Harrier has only a single powerful jet turbofan and is not reheated.
No Secret Plane here. and no PDWE..thats for certain! 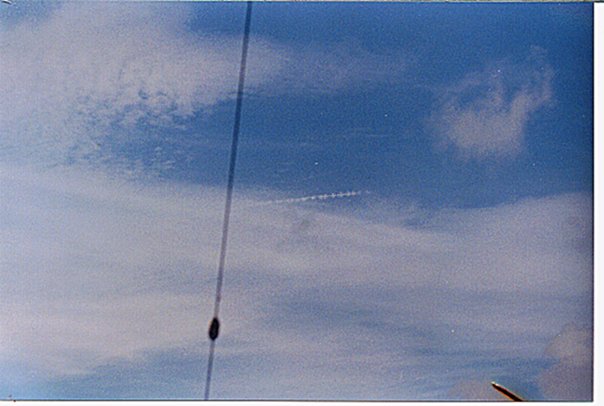 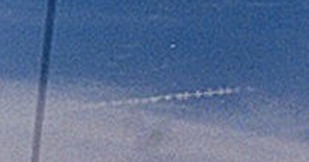 The same but without the main photograph.
Photo Copyright ©2000. Richard Cliff.  All Rights Reserved.

Below is another photo, more recent and approximately two weeks after the one above.
Location was exactly the same spot as above also but the vapour trail was directly above me, with me having to really bend over to get the photo properly.

This trail was very long, atleast 5 times longer than the previous one made by the Harrier.
It was not trailing until he became directly above me...from then on he trailed until i could not see him visually anymore.
Again.....no Secret Black Budget aircraft here and no PDWE! but only a Jaguar Strike aircraft.
Seen clearly, but not as clear as the previous is the characteristic 'donut-on-a-rope' trail, more clearly seen to the left of the picture.... 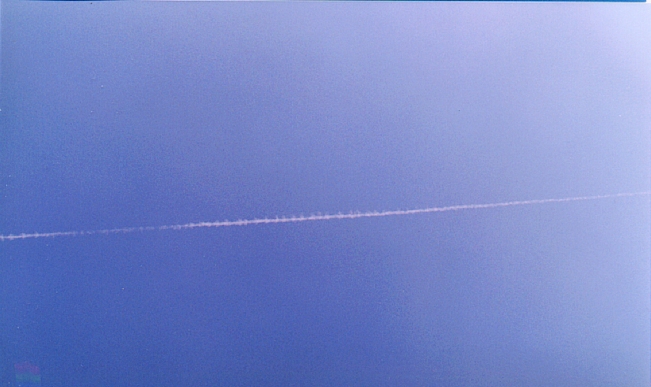 Just by seeing these two photographs you can see that by proof the aircraft that make these trails are just normal everyday jet aircraft.
I am by all means NOT saying that Steve did not see a black budget aircraft that day. However he may of just saw a very fast military jet....afterall he is near large Military Operating Areas.
With Steve being an Aviation Journalist i would expect him not to think all of a sudden that he saw a secret aircraft making that trail.
From the Distance of where he was to the relation of the vapour trail it is very unlikely he actually heard alot of noise..if any at all. The Jaguar above was at FL250 and it was not very loud at all....
The Jaguar has two reheated(afterburning) engines and makes alot of noise however when at altitude and depending on the throttle it can be quite silent. The same goes with any jet aircraft. whether it be secret or not.
Only Time will tell to see if the vapour trails some people see are actually fast moving secret aircraft with highly advanced engines.
I wrote this page to show people that normal aircraft can make any trail secret aircraft can....it just depends on the following:
Engine type
Movement
Speed
Altitude
Wind speed and direction at the aircrafts altitude.
and most important ;
Atmospheric Conditions of the surrounding and immediate area.